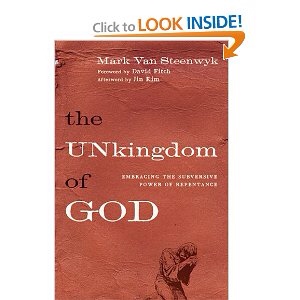 What really makes a book a good book? For me, like a work of art, a good book is precisely “good” because of its ability to facilitate an encounter with truth and beauty. A good work of art invites us to experience something greater than our current orientation to the world and transforms us on the other end of the encounter. This is kind of how I feel about Mark Van Steenwyk's latest book, The Un-Kingdom of God: Embracing the Subversive Power of Repentance. Like a work of art, this book is an invitation to explore the other end of an encounter with Mark's imagination and experience about who God is and what it means to follow in the ways of Jesus.

Mark writes from a refreshing posture of vulnerability regarding his own 'scripting' in the Christian faith. It's refreshing because his posture is not a possessive one, in that he claims no special knowledge or to have all the answers to the problems; but one that is aware of his own captivity to the Empire that God longs to liberate people from. He carries us through the chapters in humility with a desire to constantly discern the direction the Holy Spirit reveals to his community.

His premise in the book is that much of Western Christianity is married to the imperial trappings of Empire and that ongoing repentance – and relinquishment of said imperialism – should be the paradigm through which the church can experience the Kingdom. What are these Empirical trappings? The trappings of empire are difficult to see and when Mark poetically pulls the sheets back on us we are left exposed and clearly complicit in the colonialism, racism, patriarchy, and economic power systems that define privilege within the empire; a privelage the church has comfortably enjoyed for milenia. Mark helps us see in this regard that every one of us partakes in systems of injustice even as we partake in the bread and cup at Jesus' table.

Mark helps us see our shortcomings and opportunities in several important ways. Three stand out to me:

Repentance over Privilage: In the west we somehow feel we have the template on what it means to be Christians, as if the goal is to turn disciples into well behaved middle class Americans. Our Privilage has caused us to tell national myths that are quite oppressive to the indiginous people whose land we inhabit, as if our enlightened standard is the goal. He says:

The engine of Western imperialism is the quasi-Christian set of national myths that shape us into the sort of people who believe that we, uniquely, embody the good life and should spread that life to the rest of the world. The American dream is our gospel.”

Our Christian memory is tied to the empire and this empire partook and partakes in injustice to offer us the freedoms we feel make us exceptional today. In a prophetic way, Mark suggests that we shed such privilage and repent of our work in sustaining these myths and the ongoing injustices they enable. In this sense there is no genuine Christian witness or restorative justice outside of repentance, just ongoing oppression.

Compassion over charity: So we are exceptional at justice because we give a lot of money as westerners to good causes? Before reading this book I had no idea how charitable generosity can actually perpetuate injustice, even with sincere intentions. Mark deconstructs charity and offers fair criticism because rarely does charity redefine the social fabric of our societies justly – the business Jesus was about. In fact charity often maintains the divisions between rich, poor, black, white, etc… And gives us a safe place from privilege to give with little real cost. The gospels are riddled with exchanges where Jesus was critical of the status quo for excluding others. Compassion on the other hand requires a relationship of empathy on even ground. It is a radical identification with the other, a suffering with, that is mediated via a posture of repentance and rooted in hospitality. Hospitality is the primary vehicle for compassion and it is evident in the many stories Mark tells. His authority in my mind stems from the extent to which his community has oriented their lives around these principals.

Anarchy over Oppression: Mark is an Christian Anarchist and that should not scare you, although it will scare many who have a shallow understanding of it. Anarchism is simply the desire to participate in voluntary, non-coercive, combinations (or relationships) in society. It is the idea that a group of people can autonomously organize according to the community's best interest. As a Christian, Mark sees Jesus as the organizing centre of life together. The community gathers and decides via concensus what it is that the Spirit of Jesus is revealing. The Spirit also helps the community name oppression as Jesus did in his time. To Mark:

“Good anarchists are namers of all forms of oppression, seeking to understand the way oppressions reinforce each other in enslaving creation and seeing, in contrast, a way of liberation and life for all of creation.”

This is an interesting posture against the oppressiveness of our society as it places no one person or position over any other. In addition, Christian Anarchism names oppression and our complicity in it, while creating an environment where equality and mutual love can occur. This idea resonates more with how Jesus and the early church organized before the eventual marriage of church to the Roman Empire. Sadly, many ecclesial structures today reflect moreso the pattern of empire than the anarchistic organizing principle evident in the gospels.

To conclude, Mark is a tremendous cultural exegete that strives for “eyes to see” and is relentless in discovering ways to embody what the Spirit reveals. Reading this book is uncomfortable and inviting at the same time, like a good work of art. This book has challenged my own assumptions and understanding and begun to help me shake free from the lull the empire has on me at times. I'm encouraged and challenged. To many who are marginalized and have felt the boot of empire on their chest, this book is very hopeful. To the powers (including ecclesial ones) that are modelled in the way of empire and privilege this book will be hard to endure.

Toward Hope is a place for me to work out my thoughts in conversation with others. I'm a photographer and hack theologian and therefore I can't help but look at life with curiosity and wonder. Thinking theologically about everything is the goal.